Am I Practically An Atheist? 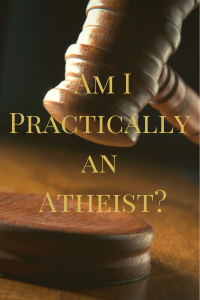 Several months ago, I had an opportunity to converse with a man who is an atheist.  He is highly educated and very intelligent.  It was a great challenge and privilege for me to share with him some of the reasons for my faith.  It caused me to do some much deeper thinking than I am accustomed to as well!  I was reminded of the verse that says we are to “…be ready always to give every man a reason of the hope that lieth in you with meekness and fear.”

I have given a great deal of thought to the opposing worldviews my atheist acquaintance and I hold, and I have wondered what causes a person to choose to be an atheist.   I firmly believe that every person is born with a knowledge of the existence of God, and a witness of Him through both conscience and creation; however, there are many things that can bring a person to the point of rejecting that knowledge.   Romans 1 speaks of those who “….did not like to retain God in their knowledge….”.  There is no doubt this is an individual decision, but what influences one to make that decision?

As I have studied the Bible, and read the thoughts of some who are atheists, I have been convicted in my own heart that I may be a contributing factor–perhaps not directly, certainly not intentionally, but maybe indirectly–by my failures as a believer.

I am afraid that many of us who believe in God, even profess to know Him personally, yet live without the fear and love of God evident in our lives make it easy for unbelievers to remain convinced that there is no proof of a living God.

Imagine a courtroom.  Atheists, agnostics, and other unbelievers demand evidence and proof that God is real.  My failures as a Christian will not be an excuse for unbelievers when they one day stand before the Righteous Judge.  He says that they are “without excuse” (Rom. 1:20), and that if they do not believe in Jesus Christ they are “condemned already.” (Jn. 3:18)

However, right now, they are being offered a pardon for their sin.  In order to receive that pardon, they must repent, believe, and by faith accept the One who offers it to them.  We who claim to know Him in His reality, for who He is, are to be the witnesses to the life-changing power of the Gospel.  Is it possible that we would be more convincing witnesses for the unbelievers than we are for Christ?

God has left multitudes of evidence that He is the Almighty God.  We have the evidence of His creation all around us.  He has given each of us a conscience which has an awareness of God, and an innate knowledge of right and wrong.  His own Son, Jesus Christ, came to this earth, lived a sinless life, then “….humbled himself, and became obedient unto death, even the death of the cross.”  This same Jesus rose from the dead, and “…shewed himself alive after his passion by many infallible proofs, being seen of them forty days, and speaking of the things pertaining to the kingdom of God…”.  He gives salvation and forgiveness to all who will confess their sin, and place their faith in His finished work as their only means of redemption.  He gives each believer His own Spirit, who teaches and empowers him to live in a way that is pleasing to God.

The evidence is there, but we who know God are to be His witnesses.  The testimony of our lips and our lives should be both credible and convincing.  If we are not actively living our faith, we perjure ourselves every day before an unbelieving world.

And if this is true of me, though I profess to be a believer, I am practically an atheist.

May God help us to speak and live the truth and power of the Gospel every day!