Christian, What Is the Basis for Your Boycott? 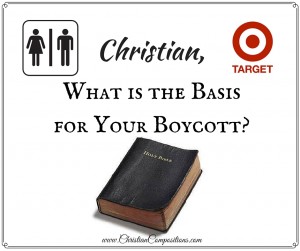 Folks, I have to admit that I am just as saddened, infuriated, sickened, and frightened by the latest “bathroom announcement” as many other people. Whether it is the position of a government, a business, or an individual, the notion that any man who wants to say he’s a woman can stroll uninhibited into a bathroom with me or my children horrifies me. I believe that this not only opens the door for men to freely enter a bathroom that is supposed to be exclusively for women and vice-versa, but it also opens the door for a multitude of other alarming possibilities. I agree that it is dangerous for me, for our sons and daughters, our sisters, and friends. I’m all for voicing our concerns, and boycotting businesses who choose to cater to the whims and wickedness of a few than to protect the innocence of our children.

Although I am frightened by the potential results of these policies, those results are not the primary reason we should be against them. We need to stop and ask ourselves some questions. Here are a few I’ve been considering:

If these are the only reasons, then I have no real authority for my position.

As Christians, we have become so fearful of being seen as “legalistic” or “fundamentalist” or “intolerant” that we have stopped looking to and speaking from the authority God has given us. We are supposed to base our lives on the Word of God. If we do, then we can speak and act with His authority. If we speak  from the Word of God, we can speak in truths that are absolute, not opinions that are arbitrary.

If we do not use the Word of God as our authority, then everything is simply preference, and someone else’s preference has just as much validity as mine does, perhaps more. This principle holds true for any decision we make and any position we take. In regards to this particular discussion, I can say the following:

No matter how I feel – sympathetic or sickened – I should act based on the Word of God.

No matter what I think, my opinion should always be subject to what God says.

No matter who I know that may agree or disagree, I should seek to know and then align myself with the position of the Word of God.

This seeming explosion of acceptance of perverse behavior that we have seen recently did not happen overnight. The efforts to blur the lines of distinction between male and female have been going on since sin entered the world. If they had not, God wouldn’t have addressed it in His Word repeatedly. There has been an aggressive and concerted effort in our nation to obliterate these lines for the past 50 years or so. We have seen it in the attempts to remove any type of difference between biblical roles, male and female appearance, and distinguishing characteristics.

This obscuring of God’s design has been done in the name of rights, equality, and tolerance at the expense of righteousness, equity, and truth.

There are those who have tried to sound the alarm for years. Faithful men of God have preached and taught what the Word of God says about our design, our dress, and our decorum. They have warned about the dangers of allowing our girls to be masculine, and our boys to be feminine. They have instructed us about the biblical roles of husband and wife, mother and father, sons and daughters.

For the most part, especially in the last 10-15 years, these men have been scorned, slandered, and spurned – not just by the world, but by their churches, and even their children. They have been labeled old-fashioned, unloving, out of touch, intolerant, bigoted, legalistic, and just about any other negative name you want to tack on there. As the criticism and pressure to conform has grown from within the church and the home, the numbers of men willing to preach and practice the truth has dwindled, but a few have continued to stand and warn. Now we are watching as what they have warned about is coming to pass.

We are beginning to reap the fruit of generations of masculine mothers and effeminate fathers, of faithless marriages and absent parents. We are reaping the fruit of allowing secular humanists to convince our children that they have no Creator, and to “educate” and “enlighten” them to the point that they no longer comprehend the basic biology of male and female.We are reaping it in young people who are so jaded that they no longer believe good marriages are possible or necessary. They have no idea that the intimacy that God designed for marriage is something sacred and honorable. They believe that babies can be murdered on a whim. They have no respect for authority and no regard for humanity. There is no fear of God before their eyes.

We can be angry at the wicked, but they are not the problem.

The world has not grown more wicked, but the church has.

Christians, we have lost our salt and our light. Little by little, we have shifted the lines that God established. The world has attacked, and rather than contending, we have capitulated. Then we have compromised.  Then we have conformed.

We have stopped using the Word of God and the power of the Holy Spirit to convict and convince the world of sin, and have instead turned to emotional or intellectual arguments. We have abandoned our secret prayer closets, and in doing so, we have enabled the wicked to “come out of their closets” with such brashness. They no longer hide in shame because we no longer shine the light.

The world disregards us and disdains us, not because we are so much like Christ, but because we are so much like them. We have excused our carnality and conformity by saying it will allow us to reach more people for Christ, but we must be willing to “come out from among them, and be…separate” before we will ever be truly effective going in to all the world to preach the gospel to every creature.

We are seeing the pattern of the book of Judges played out before our eyes, where “every man did that which was right in his own eyes.” Tragically, we are also going to see the judgment that followed the disobedience of the people of God.

Child of God, I challenge you to stand. Don’t stand on your opinion. Don’t stand on your emotion. Don’t stand as a reaction. Stand with conviction based on the Word of God. Stand for truth because it is what God says. Stand and teach your children, from the Word of God, why you are standing. Stand graciously, but firmly. Stand and give the hope of the Gospel compassionately, but fearlessly. Stand with a life that shines purely, brightly, peculiarly, distinctively, blamelessly for the glory of God. Don’t conform; be transformed.

“Wherefore take unto you the whole armour of God, that ye may be able to withstand in the evil day, and having done all, to stand. Stand therefore…” (Eph. 6:13-14)

10 Responses to Christian, What Is the Basis for Your Boycott?