Imagine We Woke Up 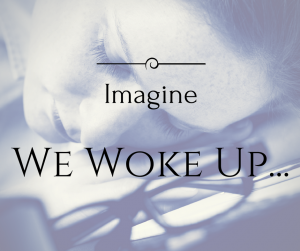 Imagine we woke up and were as fervent talking to God in prayer, and talking about God to others as we are talking about politics, or our problems, or other people.

Imagine we woke up and were more concerned that Christ may return today than we are who may become our next president tomorrow.

Imagine we woke up and instead of trying to find excuses to stay out of church, we went out and tried to find others to bring into church.

Imagine we woke up and were as passionate to follow Christ, and righteousness, and holiness, as we are to follow our favorite sports team, or TV show, or celebrity.

Imagine we woke up and were as eager and faithful to share the Good News of the Gospel as we are to share the latest bad news we heard on tv or the internet.

Imagine we woke up and were more concerned about our private, personal walk with God than our public profile or perception.

Imagine we woke up and were as zealous about being His followers as we are about gaining our own followers.

Imagine we woke up and were as anxious to spend time in His Book as we are on Facebook…or Twitter…or Instagram….or Snapchat….or…

Imagine we woke up and remembered that the grandest house, newest car, biggest raise, or trendiest gadget have zero value in eternity, but the redemption of a soul is precious.

Imagine we woke up and instead of being concerned that if we speak the truth someone might think we’re judging them, we were concerned because without Christ they are condemned already.

Imagine we woke up and realized that abortion, and terrorism, and shattered marriages, and drug abuse, and a million other “ills of our day” are only symptoms of the real sickness of mankind – sin, and that we have the cure – Christ.

“And that, knowing the time, that now it is high time to awake out of sleep: for now is our salvation nearer than when we believed. The night is far spent, the day is at hand: let us therefore cast off the works of darkness, and let us put on the armour of light. Let us walk honestly, as in the day; not in rioting and drunkenness, not in chambering and wantonness, not in strife and envying. But put ye on the Lord Jesus Christ, and make not provision for the flesh, to fulfil the lusts thereof.” (Rom. 13:11-14)

“Awake to righteousness, and sin not; for some have not the knowledge of God: I speak this to your shame.” (I Cor. 15:34)

“Let no man deceive you with vain words: for because of these things cometh the wrath of God upon the children of disobedience.
Be not ye therefore partakers with them.
For ye were sometimes darkness, but now are ye light in the Lord: walk as children of light:
(For the fruit of the Spirit is in all goodness and righteousness and truth;)
Proving what is acceptable unto the Lord.
And have no fellowship with the unfruitful works of darkness, but rather reprove them.
For it is a shame even to speak of those things which are done of them in secret.
But all things that are reproved are made manifest by the light: for whatsoever doth make manifest is light.
Wherefore he saith, Awake thou that sleepest, and arise from the dead, and Christ shall give thee light.
See then that ye walk circumspectly, not as fools, but as wise,
Redeeming the time, because the days are evil.”
(Eph. 5:6-16)

This entry was posted in Devotional Thoughts and tagged imagine, revival, spiritual, wake up. Bookmark the permalink.

2 Responses to Imagine We Woke Up