It’s All About Authority – Female Preachers, False Teachers, & the Blessing of Boundaries 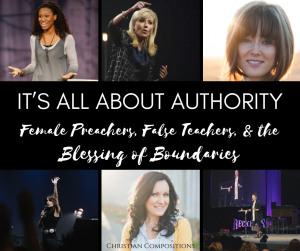 God holds women in high regard, particularly women of virtue, women who fear Him, women with a meek and quiet spirit.

Throughout the Word of God, we read many accounts of women of courage, compassion, loyalty, and a love for God and family. God gives a great deal of instruction to women on the qualities and behaviors He finds pleasing and displeasing. He gives clear direction about the roles and responsibilities He desires them to seek and fulfill. He instructs mothers to teach and train their children. He instructs wives on how to behave toward their husbands. He instructs women, young and old, married and single. He also gives clear guidelines concerning the role of women in the church.

There is no doubt women have a valuable place in the service of God. Multiple examples are seen in the Old and New Testaments of women who served, women who prayed, and women who yielded themselves to the will of God.

God concisely instructs that older women are to be “teachers of good things”. He then lists what these “good things” are, and who is to be taught. (Tit. 2:2-5) He cautions young women, and young widows (I Tim. 5:1-17). He clearly forbids women to teach, or to “usurp authority” (which means to dominate) over the man (I Cor. 14:34; I Tim. 2:9-14). This “order” in the church is consistent with the order God gives in the home as well.

In our current feminist culture, the idea of a woman being “in subjection”, or being limited, or disqualified in any way from any position based on her gender, is considered demeaning, sexist, cruel, hateful, abusive, and incomprehensible. It is imagined that if God is limiting women based on their gender, He is somehow saying that we are “less than” in some way. This mindset presumes that God’s design for women implies that they are not intelligent, not capable, not…..whatever. That idea is wrong. What it does mean (and this seems to go against current notions as well) is that women are not men.

We are different. We are unique. We are special. We have strengths and weaknesses. These do not make us better or worse than men, just different.

The Bible clearly, unequivocally states that women are not to be preachers, pastors, or teachers of men in the church. We do not have to understand all of God’s reasons, but we are accountable to obey what He has revealed and instructed. It is not a question of a woman’s abilities, but of God’s authority.

In fact, it’s all about authority.

Many well-known “inspirational” writers and women’s Bible teachers consider themselves equipped and entitled to be preachers, and we are seeing them become more prominent and more widely accepted.

Some of the most popular of these women include (but are not limited to):

Careful examination of the doctrines and teachings of these women will reveal a great deal of biblical error, but this one error alone should be sufficient warning to women who are seeking Bible truth that these are not good teachers to follow. Women like these have a great deal of influence and are especially dangerous because “by good words and fair speeches” they “deceive the hearts of the simple”, and encourage the hearts of the rebellious.

Just a few weeks ago, Beth Moore “preached” on Mother’s Day. She has received broad support from a great number of women teachers (and quite a few men as well), but does that make her right?

Preachers who dare to address the errors of these women are mocked or maligned. They are accused of sexism, abuse, and more. These women can use “great, swelling words”, like misogyny and complementarianism, or politically-charged words, like sexism or racism, to intimidate or silence their critics, but that doesn’t make them right. Even more, it doesn’t make them spiritual. A woman can be talented, eloquent, intelligent, passionate, and popular, but that doesn’t make her qualified to be a pastor or preacher, or justify her in being disobedient to God.

She claims she is “compelled to my bones by the Holy Spirit…to draw attention to the sexism and misogyny that is rampant in segments of the SBC…”. Regardless of how strongly she feels, the Holy Spirit would never compel her to do that in a way that contradicts what He has already said. (I Jn. 4:1)

If a pastor truly is immoral or abusive, he has biblically disqualified himself from authority in the church (I Tim. 3:1-7; Tit. 1:5-9); but his disqualification does not qualify a woman to assume his position.

A woman who usurps authority in the church is just as disqualified scripturally as a man who abuses authority. Both are equally guilty of disobedience and defiance to God’s authority. To condemn one while condoning the other is hypocrisy.

Using someone else’s rebellion or sin to justify our own is a common tactic. It has been used since the Garden of Eden, and it is still wrong. God did not accept it then, and He does not accept it now.

I am alarmed by women who claim to be “spiritual leaders”, yet despise the leadership God has placed over them, and I am troubled by a generation of women who are willing to follow and promote these women despite what the Bible clearly teaches.

For those who would dispute this assertion, I ask you, how do these women respond to the biblical mandates for them to be “in subjection”, or to submit to their husbands? How do they respond when confronted with the biblical limitations placed on the role of women in the church? Attacks and accusations (“…those men are just jealous, sexist….”), and even accolades and experiences (“I’ve served x number of years”), are not scriptural authority.

Are these “Bible teachers” faithfully teaching young women to be “discreet, chaste…keepers at home…and obedient to their own husbands” as Titus 2 instructs them to do? How do they explain the biblical qualification for a pastor to “rule well his own house”, and to be “the husband of one wife”?

Any “limitations”, or boundaries, placed on us by Scripture are for our good, and we should submit to them by faith. They should not be viewed in a negative light, but should be seen with gratitude as the blessings they are.

Since the Garden of Eden, Satan has been questioning God’s authority and boundaries, and convincing women that in order to be

they must go beyond God’s boundaries (Gen. 3). Eve fell for that lie, and so will we if we refuse to obey God.

Eve didn’t have to know who the serpent really was, she didn’t have to answer his arguments, or understand God’s reasons. She just had to obey. Simple obedience would have spared her from the snare of the devil.

Satan hasn’t changed his tactics, and if we refuse to listen to God’s Word, we are just as susceptible as Eve was to his wiles. He is still subtle. He is still the wicked one. He still hates God, God’s Word, God’s authority, and God’s creation.

We, as women, do not have to be seduced or deceived; but if we are not willing to obey God’s Word by faith, and submit to His authority in our lives, we are already deceiving ourselves (Jas. 1:21). When we begin to question, “Hath God said…”?, we are in a dangerous place. We must stop following everyone who claims to be a Bible teacher just because they are popular, gifted with words, or make us feel good about ourselves. We must be willing to study the Bible and examine ourselves, and those we listen to, by it.

Jesus concluded the Sermon on the Mount with the comparison of the wise and foolish men who built their houses, one on the rock and one on the sand. Both built houses. Both faced storms. One house survived; the other fell. The difference? One builder was likened to someone who hears the Word of God and doesn’t do it, while the other was likened to someone who hears and obeys the Word.

Knowing the truth of the Word of God is not what separates the wise from the fools. It is obeying the truth that determines if we are wise or foolish.

As Jesus finished His message, the Bible says, “…the people were astonished at his doctrine: For he taught them as one having authority, and not as the scribes.” (Mt. 7:24-29) (emphasis added)

Ladies, I implore you, build your life on the strong foundation of obedience to the Word of God. Be willing to cheerfully, joyfully submit to His authority in your lives. Embrace God’s beautiful, protective boundaries, and live faithfully and fervently within them. Don’t be deceived by false teachers, false promises, and false doctrine. Be willing to discern scripturally. Simple obedience will protect you.

If you would like to have the PDF version to download and print, it is available on my website free of charge. I hope that this will be a helpful resource. You may print and share it for personal use. Please do not distribute it for any commercial purpose, or reprint/distribute in a different format without permission. Thank you!

Link to free PDF download: It’s All About Authority