A God Who Cares About a Child’s Prayers

The drowsy, little girl fought hard to stay awake. Her eyelids drooped, and her head nodded as the preacher’s voice seemed to fade. Her mind wandered to the piano. More than anything she wanted to play the piano, and not just for fun, but for church. One of her favorite songs to listen to at church was ‘Til the Storm Passes By. It was as if she could hear the thunder crashing and imagine the lightning flashing as the accomplished pianist brought the keys to life.

The sleepy child decided to make a deal with God. “If I stay awake in church, Lord, please let me able to play just like Mrs. Knuckols when the service is over.”

She sat up a little straighter, rubbed her eyes, and wiggled to keep herself from dozing off.

As soon as the service was finished, she hurried to the piano with all the faith of a child and sat down, picking out the melody of a familiar hymn. There was no miraculous ability suddenly bestowed, but she tried. And the next Sunday night, she prayed again…and tried again.

Over time, she learned a few chords, a simple arpeggio, and could tap out the tunes of a few hymns, but God didn’t seem to be answering her prayers.  Although her struggle to stay awake in church lessened as she grew, her desire to play the piano only increased. She continued to make her way to the church piano after nearly every service.

One day, a rather plainspoken church member went to the little girl’s mother. “I’m getting a new piano at my house, and I need to do something with my old one. Your daughter is driving me crazy pecking away at the piano after every service. Do you want my old piano?”

“Sure!” answered the mother gratefully.

“I will give it to you on one condition. You have to get that child some piano lessons!”

Soon the piano was delivered – a dark, heavy upright with a few ivories missing – but beautiful and thrilling to the little girl with the music in her heart. 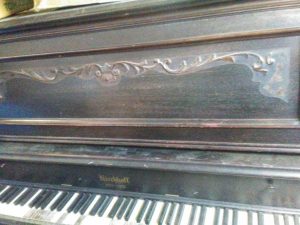 A piano teacher was found and the lessons commenced, but it wasn’t easy. Money was tight, and lessons weren’t cheap, yet each week her parents managed to find a way to pay for the precious piano lessons.

Over the next two years, the happy child learned to read music, and she played constantly. When she was eleven, she was given her first opportunity to play in her church for a special youth service. She practiced Onward, Christian Soldiers for weeks, but was so nervous when the time came that she stumbled awkwardly through the notes she had so carefully practiced.

Not long after, her family moved to another state. Within a few months, they were able to find another teacher.  It still took a great deal of effort to get those lessons. The teacher lived 30 minutes away, and it required a weekly trip over the mountain to visit her house, but her parents made the investment.

The new teacher was different and exciting. The very first day, she sat down and played a rousing rendition of Dwelling in Beulah Land. When she finished, she turned to the look at the wide-eyed girl.

“Then I will teach you.”

Mrs. Bishop went on to make it known that she required a minimum of one hour of practice daily. She was strict, no-nonsense, and pushed hard. Every song had to be counted out loud until the timing was correct. Seemingly endless finger exercises, scales, and classical memorization were required, and then she taught hymns. The four basic notes of the hymnal were transformed into chords, runs, octaves, and fills. The songs came alive, and our girl began to learn how to make the lightning flash and the thunder crash.

Their time together as student and teacher was brief, just over a year, but Mrs. Bishop had opened a whole new world of playing to the once little girl, now fourteen.

Over the next few years, several other instructors crossed the path of our student – some for a brief visit, some for a few months – each leaving some lesson or skill she could glean. She continued practicing an hour or more daily. She began playing regularly in church, nursing homes, special meetings – anywhere she had an opportunity.

Although she did not realize it at the time, and it didn’t happen in some extraordinary, abrupt way, God had answered the prayers of a silly, sleepy little girl who promised to stay awake during the preaching if God would let her play the piano in church.

You may have guessed by now, but I was that little girl. Recently, as I sat at the piano in a church service and had the privilege to play beautiful music for the Lord, I was humbled and awestruck that God had made my dreams a reality. I was reminded that He answers prayers, even the prayers of small children who have a hard time staying awake in church. He doesn’t do it to “keep a bargain”, or to reward some effort, but because He cares about the heart’s desires of His children. He doesn’t always answer dramatically, miraculously, or immediately, but He answers, especially when those desires can be used for His glory.

“Delight thyself also in the Lord, and he shall give thee the desires of thine heart.” (Ps. 37:4)